Since life, until very recently, was fraught with short and sometimes lengthy periods of famine, humans evolved the ability to store energy. For short famines (one to 2 days) glycogen stores in the liver and muscles work just fine. For longer periods, we survived by burning stored fat.

You might remember from Chapter 4 that glycogen is a polysaccharide, with sometimes more than 20,000 glucose units branched around a core protein. Even in 2D, it is beautiful: 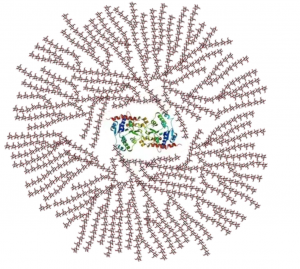 attached is the graphic of the glycogen molecule

The liver has an amazing capacity to store glycogen, and the branching structure made it possible for the liver to release multiple glucose units when we were being chased by saber-toothed tigers.

Now, I know what you’re thinking: “I thought the liver was responsible for detoxification.” True, but detox is only one of about 60 functions performed by this amazing organ. The liver acts as the clearinghouse for nutrient delivery to every cell in the body, and plays a critical role in energy metabolism. When blood sugar is low, or we’re facing an emergency, it releases glycogen. When blood sugar levels are high, it makes glycogen. If glycogen stores are full, it converts glucose to fat (triglyceride) and ships it off to the bloodstream. When blood triglycerides get too high, the liver ships the fat to your thighs, abdomen or buttocks. In the world of energy management, the liver is the orchestra leader.

A limited amount of glycogen is also stored in the muscles, including the heart, and during pregnancy, the uterus stores glycogen to nourish the fetus, and later to fuel contractions during delivery.

The point of this discussion is to introduce you to a metabolic secret, which you may have already guessed. There is an important connection between glycogen and insulin. The muscles and liver release glycogen as needed, to fuel exercise or to maintain glucose levels between meals. Think of it as glucose on demand, when cells are eager for energy. Providing this energy requires very little insulin.

For most people, on the other hand, meals are glucose overload. Cells are resistant to the action of insulin, so the pancreas, desperate to lower blood sugar, produces even more insulin. Elevated blood glucose and elevated insulin then wreak havoc throughout the body and brain.

Fortunately, there is another way to quickly dispose of glucose. Your body can convert it to glycogen but only if glycogen stores are low. How do you deplete glycogen stores? Exercise and/ or skip a meal.

You’re probably also wondering how to increase glycogen capacity to take maximum advantage of this insulin-lowering strategy. Well, let’s see…  Glycogen is stored in the liver and muscles. You can’t make your liver any bigger, but muscle mass can be increased, and also muscle glycogen capacity. Exercise accomplishes both, which is why muscle is called the metabolic equalizer.

When you deplete stored glycogen, your body will turn to fat for energy. This produces a by-product called ketones. Your body (including your brain and heart) runs quite well on ketones.  In fact, your body was designed to run on ketones whenever glucose levels are low.

The problem is that most people never run low on glucose. Every meal contains more than enough starch and sugar to last till the next meal or snack.

Question:  So you’re saying that producing ketones is a good thing?

Answer:  Not only a good thing. Evidence is mounting to show that it is a critical part of high-efficiency metabolism.

Diabetics (especially those with Type 1 diabetes) can sometimes have high levels of ketones in their body. This condition, called ketoacidosis, is a cause for concern because it can indicate that they are ill, have an infection, or that their diabetes is out of control. Thus Type 1 diabetics who have measurable ketones in their blood or urine should speak with their doctor promptly.

This unusual state, however, should not be confused with normal ketosis, which can help us get back in synch with our genes. If our hunting and gathering ancestors spent a significant amount of time burning fat and creating ketones, we should at least look to see if this affords some metabolic advantage.

Turns out, it does. A rise in ketone production helps lower blood glucose and insulin. Ketones also raise cellular energy levels while reducing the production of harmful free radicals, meaning that burning fat is highly efficient.[i] What’s more, ketones signal the muscles to generate more mitochondria, which are the energy factories within each cell.[ii]

Finally, ketones are actually the preferred fuel for the brain. Your brain, after all is a huge consumer of energy. It is only about 2% of your body weight, but uses 20% of the oxygen you inhale and 10% of your glucose stores, just to keep the central nervous system running. Ketones are a more efficient fuel, and this increased efficiency has clear benefits on brain activity, including a reduction in damage and improved repair.[iii]

Now, you may have heard that calorie restriction (CR) produces similar metabolic benefits, and it does. But are you prepared to reduce your caloric intake to approximately 900 calories per day in order to achieve these results? The good news is that there is an easier way to burn fat and generate ketones. You don’t just skip a meal. It’s a mini-fast strategy, and you’re sleeping during most of it. We call it KickStart, and the details will be provided in Intermittent Fasting Part III.

This site uses Akismet to reduce spam. Learn how your comment data is processed.